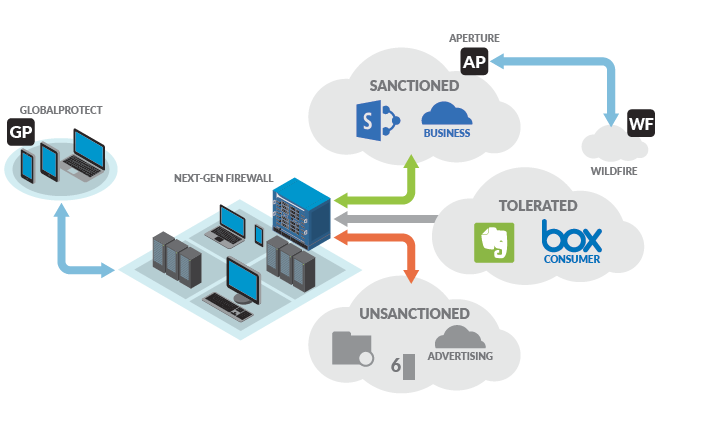 Sorry, this product is no longer available, please contact us for a replacement.

The use of SaaS applications is creating gaps in security visibility and new risks for threat propagation, data leakage and regulatory noncompliance.

The concept of data residing only in a single centralized location does not apply in today’s modern networks. Organizations now have data spread throughout multiple locations, including many that are not under their control. Regardless of the location of the data, the IT team is still responsible for securing it as it moves. This is the most visible when it comes to SaaS applications. The use of these applications is hard to control or have visibility of once the data has left the network perimeter. This presents a significant challenge, with end users now acting as their own IT departments that have control over the applications they use and how they use them but without the expertise on data or threat risk assessment and prevention. Without the right tools to enable visibility into data exposure and threat insertions, even skilled users with security experience can run into problems with SaaS applications.

Once a SaaS application is defined as sanctioned, and data is allowed into the cloud where that application resides, there are new challenges that emerge. The data is no longer under the organization’s control, and visibility is often lost. The SaaS vendors do their best to protect the data in their applications, but ultimately it is not their responsibility. Just like any other part of the network, it is the IT team’s responsibility to protect and control the data, regardless of the location.

Malicious Outsiders The most common source of breaches for networks overall is also a critical concern for SaaS application security. The SaaS application becomes a new entry and distribution point for malware used by malicious external users. Some malware will even target SaaS applications themselves, changing their shares to public so the data can be retrieved externally.

Malicious Insiders The least common of the three, but still a SaaS application concern, is the malicious internal user who purposely shares data for theft or revenge. This can be as simple as an employee who is leaving the company setting up all the folders to be shared publicly or via an external email address in order to steal the data from a remote location.

Threat Protection Protection from malware is a common concern for network security, and it is no different with the use of SaaS applications. In fact, SaaS applications introduce new threat risks that also need to be understood and controlled. One of their biggest risks is that many of them sync files with users automatically. On top of that, many people use them to share data with third parties that are out of the control of the company. The combination of these two common uses of SaaS applications presents a new insertion point for malware, one that not only can get in from external shares but also can sync those infected files across the organization automatically without any user intervention required. To properly deal with the new danger of SaaS-based threats, you need a solution that can prevent the file from residing in the sanctioned SaaS application, whether it is known or unknown malware, regardless of the source of the file. Stop the threat at the source before it has a chance to propagate to other locations.

Visibility and Data Exposure Control With SaaS application usage defined and controlled by a granular policy, there will be data moving to applications that the company has deemed as sanctioned. Once the data has reached the cloud service, it will reside within the SaaS application and no longer be visible to an organization’s network perimeter. This is traditionally a blind spot for IT. Changes, such as malware from third parties and improper sharing, can still be a danger, as mentioned earlier in the “Sanctioned SaaS Introduces Unique Risks” section, and companies need to protect themselves. An additional set of controls specific to data exposure is needed to specially address these risks that are unique to SaaS. The focus needs to be on data protection in this environment, so a deep understanding of users, the data they have shared, and how they have shared it, is key.

Prevent Risk, Don’t Just Respond Unlike a traditional firewall, the threat and data exposure protections should not be an in-line function only looking at future events. Instead, they need to look back at all the previous data and shares in the applications, even before a policy has been put in place. This way, all improper data shares are caught and resolved well before a negative, real-time event triggers the need for a manual response.

Data residing within enterprise-enabled SaaS applications is not visible to an organization’s network perimeter. Aperture adds the ability to connect directly to sanctioned SaaS applications to provide data classification, sharing/permission visibility, and threat detection within the application. This yields unparalleled visibility, allowing organizations to inspect content for data risk violations and control access to shared data via a contextual policy. Aperture builds upon the existing SaaS visibility and granularcontrol capabilities of the Next-Generation Security Platform provided through App-ID™ application identification technology with detailed SaaS-based reporting and granular control of SaaS usage. Aperture adds visibility and control within SaaS applications and provides a full end-to-end security solution without any additional hardware, software or network changes required.

WildFire integrated with Aperture provides advanced threat prevention to block known malware and identify and block unknown malware. This extends the existing integration of WildFire to prevent threats from spreading through the sanctioned SaaS applications, preventing a new insertion point for malware. New malware discovered by Aperture is shared with the rest of the platform, even if it is not in-line with the SaaS applications.

Aperture provides complete visibility across all user, folder and file activity, providing detailed analysis that helps you transition from a position of speculation to one of knowing exactly what’s happening at any given point in time. With the ability to view deep analytics into day-to-day usage, you can quickly determine if there are any data risk or compliance-related policy violations. This detailed analysis of user and data activity allows for granular data governance and forensics. Because Aperture connects directly to the applications themselves, it provides continuous, silent monitoring of the risks within the sanctioned SaaS applications, with detailed visibility that was previously unseen.

Aperture enables you to define granular, context-aware policy control that provides you with the ability to drive enforcement and the quarantine of users and data as soon as a violation occurs. This enables you to quickly and easily satisfy data risk compliance requirements, such as PCI and PII, while still maintaining the benefits of cloud-based applications. Data does not have to be based only on hosted files, either – “ unstructured data.” Data can be application entries – “structured data” – such as Salesforce.com entries. Aperture prevents data exposure in either case, supporting the common issue of hosted-file exposure, as well as application entries residing in the applications themselves. Both are common forms of improper data shares.

Aperture has a unique approach to policy that is not dependent on time. A typical network security policy is only effective for data seen after the policy is set because it only sees in-line data and applies the policy from that point forward. This doesn’t work for SaaS data exposure security, however, since the data that is shared today may have been originally shared years ago. Instead, policies created in Aperture will apply to all users and data from the beginning of the account’s creation to identify any violations. There is no need to wait for someone to try to access the data to resolve it; it is proactively found for resolution, no matter how old the data or share may be. Policies are context-driven to allow for granular definitions of data exposure risks. This is necessary to enable SaaS usage by users while still preventing accidental data exposure. Policies take into context a number of factors to create an overall data exposure risk. One or two factors may not provide enough insight into the potential risk of the share. It is only after comprehending the full context of the share that we can determine the overall risk of exposure. Risks are calculated by user type, document type, sensitive data contained, how they are shared, and whether there is malware present. This provides the ability to control the exposure at a granular level based on a number of important factors. For example, a financial team may be able to share financial data with other people on their team – but not beyond that. Even though the original share is allowed, they must not share 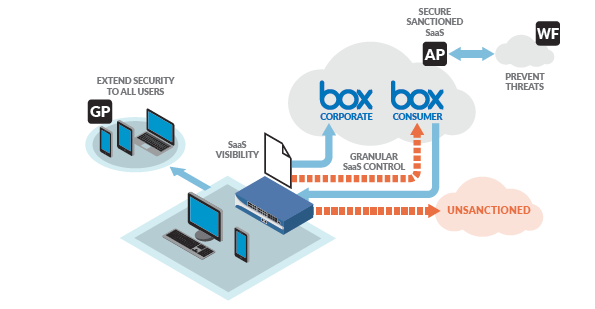 data with malware. Finance may, however, be allowed to share non-sensitive data company-wide or, in some cases, with external vendors. The key to allowing this kind of granularity is the ability to look at the share in the context of all the factors. The most common need with SaaS security is to ensure compliance of PCI and PII standards within an organization. Aperture has accounted for that with predefined policies to address these common compliance requirements.

No User or Network Impact Aperture is a completely cloud-based solution without the need for any proxies or agents for it to work. Because Aperture communicates directly with the SaaS applications themselves, it will look at data from any source, regardless of the device or location from which the data came. Because Aperture isn’t an in-line service, it doesn’t impact latency or the bandwidth of applications and has no impact on the end-user experience. Native applications on mobile devices are also unaffected, so your users aren’t limited to using only web-based access. With no network changes needed or proxies to set up, it has no impact on network configurations. No new software or hardware needs to be installed to use Aperture. It just works.

Aperture adds another dimension of security to the Palo Alto Networks Next-Generation Security Platform, providing key insight into data and threat exposure with sanctioned SaaS applications. When Aperture is included as part of a larger solution with a next-generation firewall, the capabilities increase substantially to provide an all-encompassing SaaS solution with true visibility into all applications. This includes both sanctioned and unsanctioned SaaS, with granular control of application usage (See Figure 2).

Full Visibility Into All Applications Palo Alto Networks Next-Generation Firewall technology was built from the ground up to provide unparalleled visibility and control of all applications, including details on application usage across the network. SaaS is one of the many application categories that is supported today through an extensive library of App-ID instances that provide immediate classification and fine-grained controls.

Security Extended to All Users All of the Time With Palo Alto Networks GlobalProtect™ network security for endpoints, users are connected to the network all of the time, eliminating the large number of users roaming off the enterprise network. GlobalProtect works by connecting a user’s device to the closest next-generation firewall so that full network security can be performed, regardless of the user’s physical location. And with the VM-Series being consumable in public cloud services like Amazon® AWS®, the closest next-generation firewall can be very close to the user.

Threats Prevented Everywhere WildFire is designed to identify known and unknown malware residing within the network and then share that data with the rest of the Next-Generation Security Platform. Aperture adds that malware visibility into SaaS applications directly.

Full Data Security Regardless of Location

Aperture is part of a larger cloud solution that, with the Next- Generation Security Platform, allows for data protection regardless of location. Whether data resides on-premise; has been virtualized and needs protection in a private cloud (NSX®, ACI™, Hyper-V®, KVM/OpenStack®); is extended to the public cloud (AWS, Azure®, vCloud® Air™); or has been moved to a SaaS application, Palo Alto Networks can protect it.