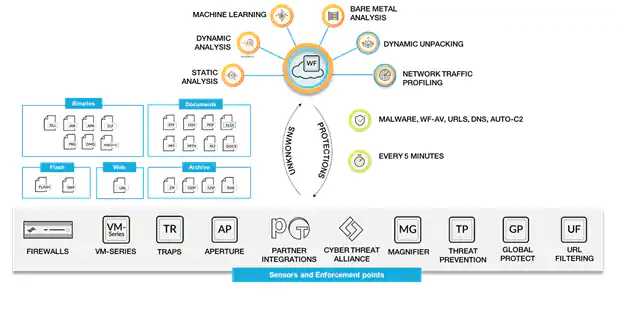 Find the Unknown With a Unique Multi-Technique Approach

Together, these four unique techniques allow WildFire to discover and prevent unknown malware and exploits with high efficacy and near-zero false positives. 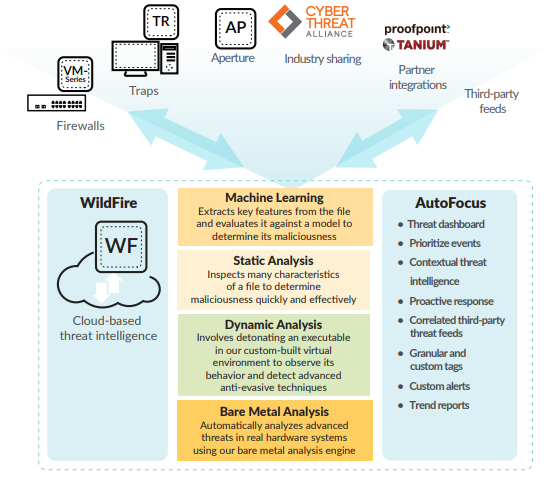 WildFire also forms the central prevention orchestration point for the Security Operating Platform, allowing the enforcement of new controls through:

The WildFire engine is based on two primary components:

In combination with WildFire, organizations can use AutoFocus to hone in on the most targeted threats with high relevance and context. AutoFocus provides the ability to hunt across all data extracted from WildFire, as well as third-party threat feeds, using MineMeld™ threat intelligence syndication engine. It allows users to correlate indicators of compromise and samples with human intelligence from the Unit 42 threat research team in the form of tags. Together, WildFire and AutoFocus provide a complete picture of unknown threats targeting your organization and industry, increasing your ability to quickly take action by:

These actions require no human intervention and reduce the cost of adding specialized security staff.

The unique cloud-based architecture of WildFire supports unknown threat detection and prevention at massive scale across the network, endpoint and cloud. You can take advantage of the service as part of the Security Operating Platform without introducing a performance impact to the firewall. To meet even the strictest local privacy or regulatory requirements, WildFire is available in multiple deployment modes, including:

WildFire users receive integrated logs, analysis and visibility into malicious events through the PAN-OS® management interface, Panorama™ network security management, AutoFocus or the WildFire portal, enabling teams to quickly investigate and correlate events observed in their networks. This allows security staff to rapidly locate and take action on the data needed for timely investigations and incident response, including:

Built on the Security Operating Platform, WildFire blocks known and unknown threats before they can cause harm, taking advantage of:

The result is a unique, closed-loop approach to preventing cyberthreats, ensuring they are known to all and blocked across the attack lifecycle.

WildFire analysis of certain file types requires the following version, or a newer version, of PAN-OS: